Foiles was named All-Foreman Field, All-Tidewater, All-State and All-Southern in football during Foilesthe 1946 season, and that same year, was named Norfolk’s Outstanding Football Player. He has the distinction to have played in the very first Oyster Bowl Game and was selected to the All-Time All-Tidewater Golden Team, which encompasses the years 1932-1982. During his high school track days, Foiles set a Virginia state record in the javelin and was named to the Look All-American Track Team in 1946. 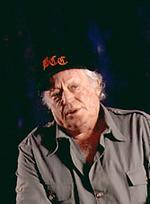 Leon Uris was born in Baltimore, Maryland, the son of Jewish-American parents Wolf William and Anna (Blumberg) Uris. Uris attended schools in Norfolk, Virginia, and Baltimore but never Urisgraduated from high school, having failed English three times. At the age of seventeen Uris joined the United States Marine Corps. He served in the South Pacific as a radioman at Guadalcanal, Tarawa, and New Zealand from 1942 to 1945. While recuperating from malaria in San Francisco, he met Betty Beck, a Marine sergeant. They married in 1945.